The war against flooding, erosion and other ecological challenges in Ekiti State has received a boost as the state government has procured four heavy duty equipment to give relief to residents.

Speaking while inaugurating the heavy duty equipment, the Deputy Governor, Otunba Bisi Egbeyemi, said the procurement of the facilities were made possible by Governor Kayode Fayemi’s collaboration with the World Bank.

The equipment inaugurated were procured under the World Bank-assisted Nigeria Erosion and Watershed Management Project (NEWMAP).

The equipment are two Amphibious Excavators and two Articulated Lowbed Trucks which were purchased to facilitate dredging and channelisation of waterways to save residents and neighbourhoods from flood disasters and for effective erosion control.

The inauguration ceremony was part of activities to mark the third anniversary of the Dr. Kayode Fayemi Administration.

The Deputy Governor who performed the symbolic test driving of one of the articulated trucks explained that the Fayemi Administration was passionate to ensure a hazard-free environment for safety of lives, investment and property.

Otunba Egbeyemi added that the gesture was borne out of the interest to motivate community participation towards reduction of natural and man-made disasters and other environmental risks in the state.

He said: “Ekiti State became one of the Tier IV States to key into this Federal Government-initiated project in July 2019. Ekiti State is immensely grateful to His Excellency, the Governor, Dr. John Kayode Fayemi, for this as we are aware that some states have been enjoying this privilege since 2012.

“Since inclusion in the scheme, the State has benefited enormously and progressed remarkably with ongoing projects at different sites and locations.

“This is another fest achieved by our amiable Governor, Dr. John Kayode Fayemi, in commemoration of his third year in office as the Governor. This further affirms that he no doubt prioritises the enhanced livelihood of Ekiti people above everything else.”

Speaking earlier, the Commissioner for Environment and Natural Resources, Princess Iyabo Fakunle-Okiemen, expressed delight at the purchase of heavy duty equipment which she said would aid channelisation of waterways to save lives.

Princess Fakunle-Okiemen noted that constant dredging and channelisation of rivers, steams and canals across the length and breadth of the state would make the people to go to beds with their eyes closed and banish the fear of flooding.

While praising the Governor for facilitating Ekiti inclusion in NEWMAP project, the Commissioner noted that the state has benefited immensely with various erosion and flood control projects going on in different locations in the state.

This, she said would bring respite to the people in the grassroots from ecological problems affecting them and their economic and social activities.

The contractor who supplied the equipment, Mr. Collins Amadi, said the excavators and trucks which were brand new would stand the test of time owing to their quality.

The ceremony was attended by officials from agency under the Ministry of Environment and Natural Resources and Office for Development Partnerships. 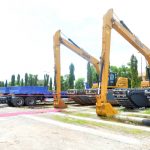 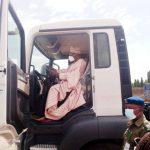 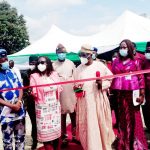