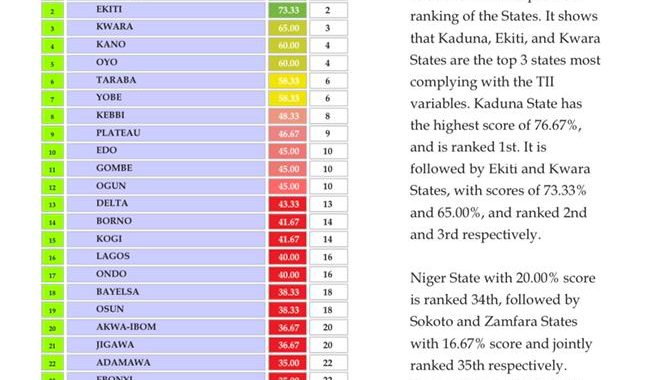 The commitment of the Dr Kayode Fayemi-led administration to transparency and accountability in governance has paid off with Ekiti State emerging as the second most transparent and integrity-compliant State in Nigeria.

Kwara State with 65,00 percent was ranked third in the report.

According to the report by the Centre whose aim is to promote accountability, transparency within the public sector and ensure good governance at all levels, the 36 States of Nigeria were assessed based on their commitments to fiscal transparency, budget implementation, open procurement and contracting, and citizens’ engagement.

The Centre stated that citizens can only hold their governments accountable when they know how they are being governed; adding that though all the 36 States have communication channels to facilitate citizens’ engagement, only Ekiti and two other States have domesticated the Freedom of Information (FOI) Law.

“The United Nation (UN) is of the opinion that informed citizens can make decisions on how they are governed. Information is power. Only when citizens know how they are governed can they hold their governments accountable for their decisions and actions. Therefore, universal access to information is the cornerstone of healthy and inclusive societies. The TII Index 2021 will provide the benchmark to rate public sector institutions in Nigeria and, at the same time, empower Nigerians to demand accountability at all levels”, the report states.

In the survey, local governments were considered parts of the State and were not assessed separately.

Under the States Variables Compliance ranking for local governments, Ekiti scored one point and was joint 4th with Kaduna State but was ranked third in its compliance with Anti-Corruption laws and Citizens’ engagement.

In Budget and Audit reports, Ekiti ranked next to Kwara, Taraba and Yobe who were joined first, while it was fifth in procurement ranking.

The executive summary of the report revealed that 20 states published the list of its awarded contracts between 2016 and 2020, while 19 states disclosed the list of the contractors.

Governor Kayode Fayemi said the administration would continue to uphold the tenets of transparency and accountability in government as well as excellent service delivery to the citizens.