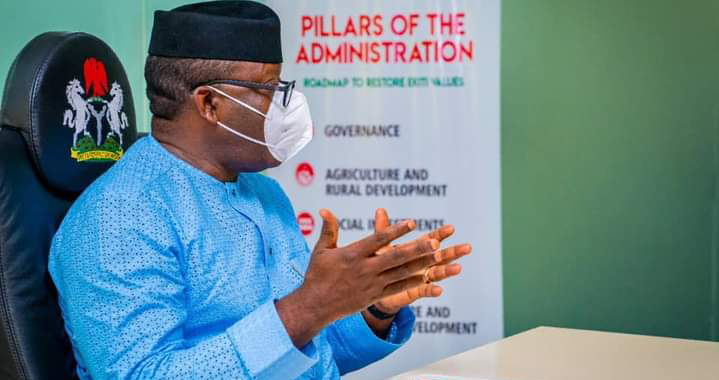 Ekiti State Government has debunked allegation that the State was deducting 25% or any amount from the gratuities of pensioners in the State.

In a statement made available to newsmen in Ado Ekiti, the State Commissioner for Information and Values Orientation, Hon. Akin Omole explained that the State Government, after due consultations with the leadership of the Nigerian Union of Pensioners (NUP), established the Ekiti Discount Gratuity Settlement Scheme as part of efforts to fast track payment of backlog of retirees’ gratuities through a negotiated discount process.

Hon. Omole who noted that the Governor Fayemi led administration increased the amount of money released monthly for payment of gratuities to N100million from N10million that the previous administration was hitherto paying, stated that the amount could only settle less than 30 retirees monthly while the funds available under the new scheme will be capable of settling up to 1000 retirees when it starts early next year.

Omole added that the State Government consequently negotiated and obtained approval of the leadership of the Nigerian Union of Pensioners to commence the Scheme whereby a financial institution (United Capital) would pay the retirees under agreed terms and collect the funds from government between now and 2022 when the programme would end.

He stressed that the scheme was designed to ensure outstanding gratuities are paid as early as possible instead of government to continue owing retirees’ gratuities for years.

Emphasizing that the participation in the scheme is optional as no pensioner would be forced into the arrangement, Omole stated that it was designed for pensioners who would rather collect their gratuities within the stipulated period than wait in line for years to do so.

According to him, interested pensioners are to choose which period they prefer from March, 2021; June, 2021; October, 2021 and February, 2022 with discount of 15 percent, 10 percent, 5 percent and 0 percent respectively, adding that concerned pensioners would be guaranteed payment of their individual gratuities with promissory note that would be issued to them.

He said that, “the promissory note is like a post-dated Cheque. Once issued, the pensioner is guaranteed payment of his gratuity on the date written on the Cheque. No story!

“Other pensioners who are not interested in participating in the scheme may however wait patiently for the date on their Promissory Notes which would be issued for February, 2022 and they would get their money in full without discount or deductions.

“The Scheme is completely optional. No retiree is forced or mandated to accept any discount if they choose to wait until February 2022.”

Stressing that the scheme is part of efforts of Governor Fayemi to swiftly alleviate the burdens of retirees in the State by settling their gratuities without bankrupting the state, Omole said that interested retirees are already collecting and filling the forms to sign up for the scheme.

He therefore called on people in the State to disregard any contrary report being circulated by those he described as mischievous elements to foment anarchy in the State.