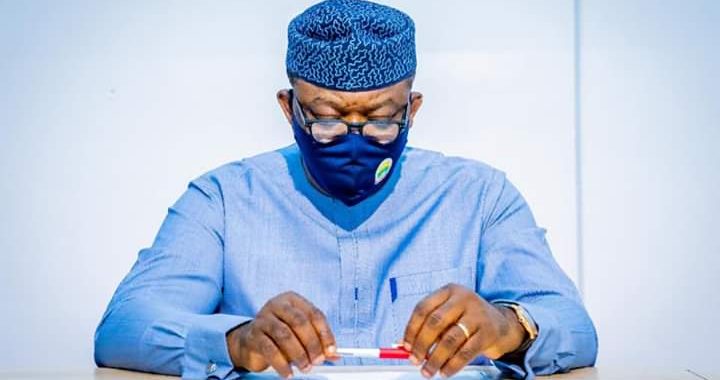 The Ekiti State Government on Wednesday confirmed that the Governor, Dr Kayode Fayemi has gone on isolation for treatment after testing positive to COVID-19.

The Commissioner for Information and values Orientation, Aare Muyiwa Olumilua gave the confirmation in Ado Ekiti during a press briefing on the activities of COVID-19 taskforce in the State.

Governor Fayemi had earlier on Wednesday announced his COVID-19 positive result via his verified twitter handle, assuring Ekiti people that he was okay and already self-isolating at home and receiving medical care.

The Governor, according to the Commissioner is in high spirits, asymptomatic and participated in the virtual Executive Council meeting held on Wednesday.

The Commissioner further revealed that Dr Fayemi would be working remotely from home but critical assignments that requires his physical presence has been delegated to his deputy, Otunba Bisi Egbeyemi and other state officials.

“The test result was obtained last night and this morning he went on his twitter page to break the news as a responsible leader would do.

“At the moment, he is asymptomatic, he’s hale and hearty and in high spirits but has decided to stay in isolation and complete his treatment.

“With regards to this, His Excellency will still work remotely from home but critical assignments that might require a physical presence would be delegated to the Deputy Governor, Otunba Bisi Egbeyemi.

“All he asks everybody to do is to remember him in prayer and wish him quick recovery.

“As a follow-up to Mr Governor’s testing positive, many of his immediate aides have also gone for testing including the wife of the governor.” he said.

Giving an update on the Community testing embarked upon by the State, the Commissioner for Health and Human Services, Dr (Mrs) Mojisola Yaya-Kolade disclosed that about a thousand samples had been randomly collected through the scientific survey system.

She mentioned that the State had recorded 86 positive cases and currently attending to 37 active cases, adding that 449 contacts have been established out of 518 contacts that were being traced and about 61 currently under follow up.

Reacting to a question from journalists, the commissioner said no one can say exactly where the governor contracted the virus but was glad to say that the governor, being a responsive and responsible person has done the needful by informing those who needed to be informed about his status.

She confirmed that the state already has community spread of the virus which was mainly as a result of the opening of interstate borders by the federal government.

Also speaking the Coordinator of the Taskforce and Director General Office of Transformation, Strategy and Delivery, (OTSD) Prof Bolaji Aluko said the Government would continue to impose sanctions through its mobile court on violators of measures put in place to curb the spread of the virus.

Prof. Aluko emphasized the need to enforce all COVID-19 protocols of hand-washing, regular use of sanitizer and the use of face masks so as to forestall any further spread of the virus in the state.

He reiterated that the ban on traditional festivals and congregation of large people in hotels beyond the required number is still in force.

On the preparedness of the State Government on the reopening of schools and worship Centres, the Commissioner for Environment and Natural Resource, Mr Gbenga Agbeyo said the ongoing fumigation exercise started by the state government last week Friday has reached five local governments in the State with the intention of preparing the educational premises and worship centers all over the state for reopening.