The Ekiti State Governor, Dr. Kayode Fayemi, has identified capacity building for civil servants as necessary for good governance and crucial to the success of his administration.

Dr. Fayemi who was represented by the Deputy Governor, Otunba Bisi Egbeyemi, spoke on Thursday at the commencement of a two-day training organised for Senior Administrative Officers in the State Civil Service at the Governor’s Office, Ado Ekiti.

According to a statement by the Special Assistant (Media) to the Deputy Governor, Odunayo Ogunmola, the training was part of the Fayemi administration’s effort to drive the vision of building a modern public service that will serve the state more diligently and effectively.

The state Chief Executive explained that the capacity development of public servants is a priority adding his administration would not renege in the vision of making its civil service proud among the states of the federation.

The Governor said government undertook to organise the workshop despite the lean resources because of the value it has for civil servants and their importance as the engine room of policies and programmes of the government.

He identified some of the measures taken to reposition the public service to include the recruitment of new career civil servants and teachers for primary and secondary schools.

Others, according to him, are the appointment of administrative officers, accountants, auditors, inspectors of taxes and registrars of cooperatives which have assisted in injecting fresh blood into the system for effective and efficient service delivery.

The Governor added: “Our administration is committed to the capacity and career development of its workers. To encourage our deserving workers, over 600 officers had their careers upgraded through conversion.

“There is a three-month career-enhancing programme for junior officers at the Staff Development Centre (SDC) to enhance the workers’ skills.

” It is my firm belief that we cannot raise the quality of public governance without improving the skills of civil servants, who are the engines propelling the government’s policies and programmes.”

The Head of Service, Mrs. Peju Babafemi, hailed Governor Fayemi for his commitment to the capacity development of workers despite the global economic challenges and for his magnanimity in approving the programme.

Mrs. Babafemi noted that administrative officers play invaluable roles in the public service and are very central to the effective running of the Ministries, Departments and Agencies (MDAs).

According to her, the public service is dynamic hence it is necessary to improve on workers’ administrative effectiveness and learn skills that would make them relevant in the 21st Century.

The Head of Service said the training programme would enhance the participants’ knowledge on how to self-manage for efficiency and effectiveness, communication skills, increased knowledge in managing conflict people management and executive comportment.

She added: “Today’s civil servants are addressing problems of unprecedented complexity in societies that are more demanding than ever. As administrators, you require the skills to keep pace.

“The COVID-19 pandemic has also placed the demand on the public service to adopt new approaches to work. The tools of administration are now increasingly digital and networked.”

Mrs. Babafemi advised the participants to take full advantage of the opportunity provide by the training to enrich their knowledge assuring that other cadres would have their time for such opportunity in due course. 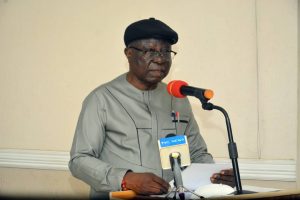 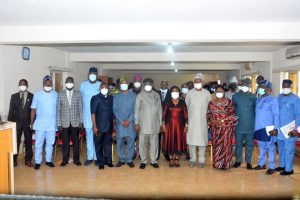 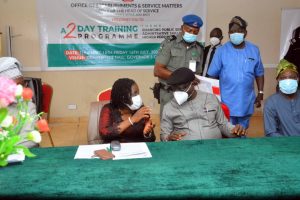 . Babafemi advised the participants to take full advantage of the opportunity provide by the training to enrich their knowledge assuring that other cadres would have their time for such opportunity in due course.