Ekiti News10th Anniversary of the Creation of Ekiti State State 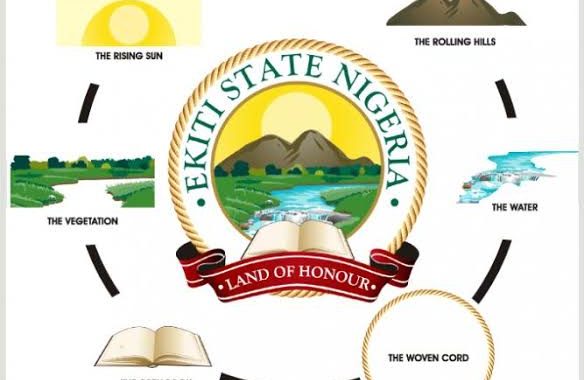 10th Anniversary of the Creation of Ekiti State State

On March 6, 2011, the Government of Ekiti State launched a new logo to represent the essence and aspirations of the people. The logo was created by the Branding and Communications Strategy Committee under the leadership of the late former Deputy Governor, H.E. Mrs. Funmi Olayinka, of blessed memory, as it was then constituted. Mr. Akin Rotimi was the creative lead on the project, collaborating with Dr. Dele Olukayode and Dr. Bakare Lawal. Six elements to make up the logo were arrived at after extensive research as follows:

The Woven Cord: The Woven Cord depicts the culturally homogeneous nature of the Ekiti people. Ours is the only state where all the towns and villages are suffixed with “-Ekiti”.

The New Dawn: The New Dawn symbolizes Ekiti’s place as the emerging land of opportunities. It also symbolizes the hope and optimism associated with the Ekiti people which makes us rise above challenges, to ensure we remain on the path of peace and progress.

The Vegetation: The Vegetation depicts the fruitfulness of our land. It symbolizes a land blessed with an abundance of a wide variety of natural resources. It also represents the mainstay of our livelihood – Agriculture.

The Water: The Water represents the springs in Ekiti State, particularly the Ikogosi Spring – the only place in the whole world where hot and cold water springs naturally occur side by side. A wonder to the world, a pride to us.

In addition to the general version that can be used by any Ekiti indigene, there are variations that are used exclusively by the Government of Ekiti State, the Deputy Governor, as well as the Seal of the Governor.