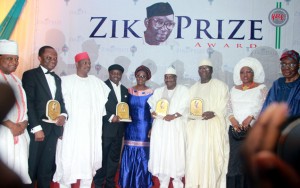 Ekiti State Governor, Dr Kayode Fayemi and the five recipients of this year’s  Zik Prize in Leadership have charged Nigerians to renew hope in the Nigerian project; saying that building a new Nigeria that the citizens dream of requires that all stakeholders, regardless of their political leaning work together in unity.

Speaking  on behalf of the recipients, Governor Fayemi said the zeal and impetus for Nigerians “to trust each other, dream together, work together and succeed together in building the Nigeria of our aspirations” comes when “the hearts of citizens beat together in patriotic rhythm.”

He added that when one considers the foresight of the first Nigerian President, Dr Nnamdi Azikiwe, with other patriots in pursuance of the nation’s greatness, there is tendency to despair as one reflects on the trajectory that Nigeria has been through.

The Governor pledged that the recipients would rededicate themselves to the struggle for a just and prosperous Nigeria, while also working with and for the people to make the country greater.

Fayemi said: “In accepting this award, we are conscious on one hand of the increased burden of expectations on us as we join the distinguished cadre of winners of the Zik awards across the continent. On the other hand we are cognizant of the weight of responsibility that comes with being a recipient of an award that was inspired and named after the Rt. Hon Benjamin Nnamdi Azikiwe, the first President of Nigeria, of blessed memory”, he said.

Fayemi who dedicated his award to the memory of his former Deputy, the late Mrs Funmilayo Olayinka,  who died in April, also attributed his own success to the contributions of members of his cabinet whom he described as “hardworking toilers”, saying that the award is in recognition of the collective accomplishments of the people of Ekiti State.

It was a night of colour and glamour as Nigerians from different walks of life gathered at the Civic Centre, Ozumba Mbadiwe Street, Victoria island to celebrate the memory of the first president of Nigeria, whose memory the Leadership award is named.

While Hon Tambuwal received his award in the Public service category, Governors Fayemi, Kwankwaso and Uduaghan received the prize in the Good governance category, while Odumegwu and Ihejiahi got the Professional leadership category.

The awards were presented to the recipients by the duo of Chief Ernest Shonekan, who was Special Guest of honour and Chief Sunny Odogwu, chairman of the occasion.

In his remarks Chief  Shonekan said the awards are well-deserved because the recipients have made contributions to the development of this country.

Shonekan added that “whatever we do in any human endeavour is being recorded and does not go without being noticed” hence everyone should not relent in contributing meaningfully and positively to the development of Nigeria.

The Minority leader of the House of Representatives, Hon femi Gbajabiamila, led other members of the lower legislative House to rejoice with the Speaker. These include Hon Oyetunde Ojo; Hon Robinson Ajiboye; Hon Bamidele Faparusi; Hon Bimbo Daramola; Hon Ife Arowosoge among others.

The Zik Prize in leadership award is Governor Fayemi’s third major award within a year.  The Ekiti State Governor  had in September last year received the Leadership Newspaper’s Governor of the Year Award. He also received  the Samsung’s Best Governor in Africa (for ICT Application in education) in March this year in recognition of his Computer per child initiative under the e-school project of his administration.