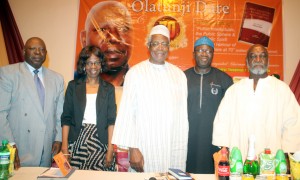 It could well have been a gathering of the academia – many professors were there – or newspapermen – they came in their numbers.

The downpour failed to dampen the spirit of the ceremony.

A public lecture and book presentation were held to celebrate the revered journalism teacher, who is described as “a master satirist”, “stylistic exemplar” and “magisterial editorialist and columnist”.

The book: Public intellectuals, the public sphere and the public spirit, is a collection of essays in Dare’s honour. It was edited by Prof. Wale Adebanwi, with contributions from 26 media, literary and civil society scholars, media managers and social activists.

A former Defence Minister, Gen. Theophilus Yakubu Danjuma, who chaired the event, spoke of the need for Nigerians to value their homeland.

He has high regard for those who have achieved success abroad, the likes of Dare.

Dare, who studied Mass Communication at the University of Lagos, (UNILAG), graduating with First Class Honours, earned a Master’s degree in journalism at the famous  Columbia University in New York, and a doctorate in Communication Research from Indiana University, Bloomington, with specialisation in international communication and public policy analysis.

He taught at (UNILAG), before he was appointed a columnist and editorial page editor at The Guardian. He subsequently took up a teaching appointment at Bradley University, illions,  United States. He is The Nation’sEditorial Adviser, running the popular column, At Home Abroad.

Danjuma believes Nigerians must not take their country for granted despite the chances of succeeding abroad.

“One of the things that most Nigerians, especially the elite, take for granted is our citizenship, the fact that we are Nigerians and this is our country. We take this for granted.

“Until events happen and we have cause to flee the country in order to stay alive, suddenly, we become strangers in a foreign country.

“At the point of entry, when they ask you: ‘Where are you from?’, and you say: ‘I’m from Nigeria.” They will ask you: ‘When are you leaving?’ That is the time you will know that you’re nowhere.”

“I have the highest respect for those who have had to leave their homeland, stay abroad and prosper Dare has gone through all that in his life.

“He has had to transform from a reporter and writer to a teacher and doing so successfully. He excelled in all this,” Gen. Danjuma said.

Ekiti State Governor Kayode Fayemi, attending his first public event since the June 21 election,  said he regarded Dare “as one of our very best in the industry.”

He said he considered it a duty “to pay homage to intellect and to someone who has taught us importance of public intellectuals in the development and the deepening of democracy.”  “That is why I didn’t want to send someone here,” he said.

The governor, who walked into the hall quietly and without a retinue of aides, noted that Gen. Dajuma praise his modesty, something that should be a way of life among public officials.

“The very things that the chairman was congratulating me and commending me for are supposed to be the things that are no longer in demand or popular in this country.

“Intellect, elitism, decency, progressive commitment to people are not supposed to be in great demand, at least if we go by what we read – because it is not ‘grassroots’ (general laughter, applause); it is not ‘stomach infrastructure’ (more applause),” he said.

According to him, the alternative would have been for him to walk in with gun-totting security aides, a siren-blaring convoy and “goons disturbing the peace of the hall”.

“That way, I will be the people’s governor. I really worry about that,” Fayemi said.

“Prof Dare is a man who can look at any demagogue and say it as it is, no matter whose ox is gored. The very acerbic, very aspericious, very dialectic and very coruscating words from Prof Dare are enough to explode the holes of power mongers which is a parallel of the sordidness that gnaw the outside of them. I wish him happy birthday at 70,” he said.

Obahiagbon said the governor regretted “viscerally” his inability to attend the event.

The guest speaker, Prof Kwame Karikari of the University of Ghana, Lagon, who met Dare at the Colombia University’s School of Journalism where they were foreign students, along with Dan Agbese, recalled that Dare was the best editorial writer in their class.

Speaking on the topic: Memories of censorship: Defending and promoting freedom of expression in West-Africa , 1997-2013“, karikari  recounted the difficulties faced  by the media in the face of autocratic rule in Africa.

Urging the media to explore legal remedies in defence of their freedom, he said they must also look inwards and ensure they are above board.

“In my Akan language, there is a saying that, as you caution the cat, you must also advise the stinking fish. The media profession is not all that glorious. It should be acknowledged that the media profession around the continent is full of lapses, unethical behavior and plain corrupt practices that grant enemies of media freedom the excuse or pretext to constrain or repress media rights.

“In many countries, the fast growing involvement of politicians and parties in media (especially radio and broadcast) ownership, for the principal object of political propaganda and fomenting of tensions during elections, is a trend worth our concern,” he said.

Karikari believes there is a strong basis to be optimistic about the future progress of media development, media freedom and freedom of expression in Africa.

“There will continue to be reversals, disappointments, relapses into tendencies toward violent and reprehensible forms of restrictions and repression. As long, however, that there continues to be citizens or professionals committed to pursuing progress – even at any cost – progress will always be in sight,” he said.

An emotional Dare said his wife was absent because she had to attend to their autistic son.

“My wife is not here today because our child is autistic,” he said, adding that he would devote his retirement to helping improve the lives of autistic children.

“Autism is far more widespread than I realised. I’ve resolved to work towards creating awareness about autism and to bring those who suffer from autism some succour,” he said.

Chairman, Board of Directors of Vintage Press Limited, publishers of The Nation, Mr Wale Edun, represented by the Managing Director/Editor-in-Chief Mr Victor Ifijeh, wished Dare success in his voluntary work.

“On behalf of myself and indeed everyone at Vintage Press Ltd (The Nation), I most heartily wish you a happy birthday and many more years of health and happiness. In particular, I wish you much success in your desire to devote your retirement to voluntary work in the important field of autism, among other areas.

“I have personally enjoyed, admired and learned a great deal from your writing in The Guardian in the 1980s and 1990s and now in your Tuesday column for The Nation, currently the widest circulating newspaper in Nigeria – a feat which is in no small part attributable to the enviable quality of our columnists, such as yourself.

“Your readiness to sacrifice your livelihood on the altar of principle in the dark days of Abacha dictatorship is a rare case of a man willing to lead by example. It forever stands you out among men and will forever elevate you in the eyes of the silent majority; the seeming lack of public recognition and acknowledgement not withstanding.

“It is for these reasons that I am honoured, proud and indeed deem it most pleasant duty to present this book; and to commend it to student-scholars, researchers, patriots and indeed the general public,” Edun said.

The book reviewer, Prof Adigun Agbaje of the University of Ibadan, represented by Mr Muyiwa Adekeye, said Dare does not hide from matching public rhetoric with action. He described the octogenarian as a “master satirist”.

The book, edited by Prof. Wale Adebanwi, is divided into five parts, with contributions from Prof Adebayo Williams, Prof Lai Oso, Odia Ofeimun and Dr Doyin Abiola, among others.