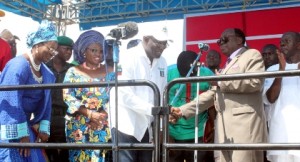 It is no longer news that Ekiti State Governor, Dr Kayode Fayemi, had marked his three years of unprecedented achievements in the state. To mark the three years of the advent of his government, he commissioned over 1,000 landmark projects.

Apparently impressed by the level of achievements Fayemi has brought to Ekiti, an elder statesman, Chief Afe Babalola (SAN) at the grand finale of the celebration, featured not only to commend the governor for his good works in terms of developmental projects in the state but also used the occasion to endorse him for a second term. He detoured to a Yoruba adage-beegun eni ba joore lua, ori ayaniwhich connotes that if one’s masquerade dances well in a ceremony, one is bound to be exceedingly happy.

Having been carved out of the old Ondo State in 1996, Ekiti has come of age. It has a line of historical antecedents. We have witnessed in this state when a governor went berserk out of infantile mind and disrespected this great Man. Little wonder, this government was short-lived .A flagrant disrespect to this avatar spelled doom for that government, as it was rejected by Ekiti populace .

It is axiomatic that a child that snatches an elder’s walk stick will not live long, but if a child knows how to wash his hands he would eat with the elders. Fayemi knows how to wash his hands; he puts Ekiti first in his vision, he is a man with passion for the development of the state and he pursues this with all vigour and determination and he is achieving results that are commendable.

Perhaps, these qualities must have impressed Aare Afe Babalola that made him to openly shower accolades on him, praying for him and urging him to continue in his developmental agenda for the state. Apart from him, other elders of means and dignity, including Chief Deji Fasuan, who is also one of the founding fathers of Ekiti, and some elders who were being appreciative of the monthly social security scheme for the aged, have been lauding Fayemi for his good works . But Aare Afe`s endorsement of Fayemi became news because this man is not a man that gives in to frivolities.

Afe, as fondly called by admirers, is a man that has unquenchable thirst for excellence, humanitarian services, generosity and dedication to service without expectation of monetary reward or praises. He is a philanthropist and a revered legal icon; a Senior Advocate of Nigeria, Doctor of Letters, Officer of the Order of the Federal Republic of Nigeria, the Commander of the Order of Niger; winner of Queen Victoria Commemorative Award at Socrates Award of European Business Assembly in Oxford, UK and member of Rector of Europe, among many other such awards. With this array of laurels, one could conclude that his verdict may mean the verdict of the people and that of God.

He is an icon of progress and development in Ekiti. He is man that has great passion for Ekiti development; he is a man that thinks Ekiti, and a man with great vision for the state, always working for justice, peace and unity of Ekiti

Babalola Founder of ABUAD the fastest growing Private University in Nigeria, said he has been vigorously engaged in ridding the country of leadership deficit through transformational and visionary educational policy which placed priority on the need for developing, training and grooming future leaders in an enabling academic environment to enhance job creation, food security and human capacity development amidst fanfare at the rally which was held in Oluyemi Kayode stadium, Ado-Ekiti, the Ekiti State capital to mark the three years in office of Governor Fayemi`s government. He congratulated Fayemi and the Ewi of Ado-Ekiti, Oba Rufus Adejugbe for their inoculate efforts towards the reformation and transformation of Ado Ekiti, turning it to mega city.

On the occasion which had in attendance youths, women representatives, student representatives, market leaders and several leaders of the All Progressives Congress including the Edo State Governor Adams Oshiomhole and his counterpart from Osun State, Ogbeni Rauf Aregbesola, Aare Afe, showered encomiums on Fayemi, his wife, Erelu Bisi Fayemi and his entire cabinet members for the laudable achievements of the government.

Aare Afe, who expressed satisfaction at the beatification of Ado Ekiti Local Government and the infrastructural development across the state, specifically described Governor Fayemi as a visionary and focused leader that Ekiti can be proud of. “We are witnessing an historic event in Ekiti; every patriotic person must support development and transformation programmes of Fayemi,” he concluded.

This article was first published in The National Mirror on Sunday, Jan. 26th, 2014