FEATURES: The Stone The Builders Rejected 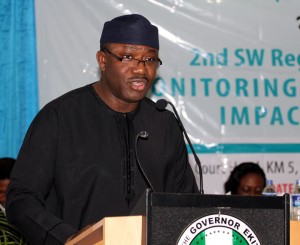 I met John Kayode Fayemi sometime in 1984 when we were both Student Activists at the University of Lagos. He graduated in 1985; I graduated in 1987. He represented Eni Njoku Hall while I came from Moremi Hall to serve on an ad-hoc committee on some issue then.

Kayode was the calm, studious type; never heard him raise his voice even in the heat of many arguments that characterised student unionism.

He also joined us in ‘Theatre 15’. So, we hung out socially with other friends sometimes but he was more studious than sociable.

He was always an introvert, not a party freak like me; highly intelligent, very amiable, very loyal and fiercely principled. If Kayode promised to meet you at 2.00pm, he will be there on time. He kept his word.

After his graduation, we lost touch until we met again on January 1, 2000 New Year Service at the Household of God. We picked up the friendship. I congratulated him on his role in the Abacha Resistant Army in Diaspora, exchanged contacts again and remained in touch.

I found out later that he was classmate with my friend, Dr. Eniola Ajayi, at Christ’s School (75/80 set); so, we met often, as I became an adopted member over time.

When he decided to run for governor in the 2007 elections, my support was muted, as I was working on Rev. Chris Okotie’s campaign then. We even met in Abuja once when I introduced them. Then, the struggle (to regain his mandate), the re-run (election) and finally the judicial victory on October 16, 2010.

Though I hated traveling, I left my show that Saturday morning to be at the swearing-in. We arrived late about 6.00pm in a rainstorm, with thousands of people all over the government house (Ado-Ekiti).

Someone went to tell him I was around and he sent them to get me. When I made to leave for the hotel a friend had arranged for me, Kayode said, “No, Sola, you are sleeping here tonight.”

Then I remembered that while we were waiting for judgment, he promised me that I would have a permanent guestroom in the government house. In the midst of the excitement and jubilation, Fayemi remembered his promise and kept his word! That is the character of the man we now call JKF… o wi bee, o se bee!

As governor, Fayemi maintained his idealism in the face of seemingly insurmountable challenges. He had a fierce passion for the Ekiti people and was totally committed to lifting his people back to the past glory Ekiti had especially in education.

Kayode refused to be addressed as “Your Excellency”. When we told him we could not call him by name in deference to his office, he compromised and agreed to ‘Mr. Governor’.

He disliked patronage. Once I sent him a mail on some issues and he didn’t respond in time. When I later saw him, he said, “All the many sirs you wrote there put me off.” Smile!

Fayemi is a strategic planner, a confirmed workaholic. All through the campaigns, he returned to the office to treat files so governance would not be truncated by politics. He was totally committed to making the lives of his people easier and was determined enough to face the challenges.

JKF had the political will to take the hard decisions necessary for development, even when it cost him his popularity. The teachers’ issue was a case in point.

Sadly, though he eventually bowed to the political interests, it didn’t make the difference.

Every decision he made was always about Ekiti interest first. I remember when I was appointed as Chairman, Restructuring Committee to resuscitate the Broadcasting Service of Ekiti State (BSES), I proposed that we terminate the contract of the previous government and re-award, as some of the equipment yet to be delivered had newer versions and were now cheaper.

He explained that it would cost Ekiti more in litigation to get out of that contract than to continue. So, we stuck with it.

Fayemi retained practically all the contractors inherited from the PDP government to complete all ongoing projects except where the contractor was shoddy or could not deliver — a pragmatic approach that did not sit well with his party people who felt he should terminate and re-award to the then ACN loyalists. That was the beginning of the “Stomach Infrastructure” agitation.

Once at the State’s Economic Summit, Governor Fayemi explained that the reason he did not terminate ongoing contracts, as is customary with Nigerian politicians, was because he wanted to earn the trust and confidence of investors that government is a continuum and they can rest assured that their investments would not be threatened by a change in baton in Ekiti State. Maybe he should speak only for himself…

Kayode’s passion for excellence in his people is unrivalled. He seeks out Ekiti indigenes blazing trails all over the world and celebrates them. The concept of Ekiti State Calendar had an inset of a successful Ekiti man, woman, young and old in various walks of life irrespective of religion, political party, class or creed. They were Ekiti ambassadors; the primary assets of Ekiti State… its people.

Sadly, the Ekitis at home resented their blood who they termed as “Ekiti Abroad” — as if not living in Ekiti diluted the potency and authenticity of their genealogy.

Fayemi leaned on his personal favours and goodwill to develop Ekiti State. Many of the achievements recorded were at the sweat of his numerous friends.

I recall that as Chairman, Restructuring Committee at BSES, I received an allowance of N800k a month to cover for my hotel and feeding. I drove my own car, paid my driver’s salary and provided his accommodation; yet, I was termed a “consultant”. There were many of us like that who were perceived as Lagos consultants who came to chop Ekiti money.

But we did our best because we believed in the vision of our friend to elevate his people from subsistence to abundance. They threw our idealism back in our faces though.

I could go on about Dr. Fayemi and the quality of leadership he brought to bear in Ekiti State but I leave the rest to posterity.

Sadly, it took his humiliation at the polls by the same Ekiti people, he sacrificed for, in the last election for Nigerians to finally catch a glimpse of the character of one of the best leaders Africa has and will ever produce. Sad, extremely sad!

I have finally accepted that majority of Nigerians don’t want good leaders. Anyone who is better than us is not fit to lead us. We want to remain as we are; we really don’t want to be better than where we are.

Any politician who gets that will always win elections. Any political party that is not willing to “potty ile ikin” (screed the beehive) is wasting its time. We don’t deserve the Dr. Fayemis of this world (and there are quite a few in every tribe, race, ethnicity and religion).

Is he a saint? Far from it; no man is perfect but his good far outweighs his weaknesses.

My friend, I wept profusely this morning (June 24) after reading about your meeting with Governor-elect, Ayo Fayose. Your strength of character humbles me.

I have always told people that if Ekitis voted to reject you, you and your exceptional team would leave without rancour. Thank you for not disappointing me, and many more who admire you.

You endured the many lies and ridicule of the past four years without missing a step in your commitment to making poverty history in Ekiti State. Unfortunately, the Ekiti people didn’t want your vision and couldn’t bear with you a little longer.

What hurts me most is not that you lost; losing is an option in every contest but that not one local government out of 16 could at least say, “we appreciate your effort!” Did Ekiti State hate you so much? O ma se oo!

You have never been a loser and even in the face of this humiliation, you stand tall. I am proud of you. The 120,000 Ekiti citizens, who voted for you in the face of the Federal Government intimidation and harassment, are proud of you. Even your detractors and haters, through these brutal campaigns and elections are being humbled by your exemplary statesmanship.

My friends, this is the stone that the builders in Ekiti State rejected!

• These articles were first published by huhuonline.com