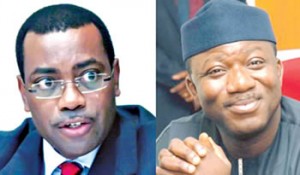 Although they represent different political districts in the state, they are united by one goal: to bring development and prosperity to Ekiti State. And they are not doing this in half measures.

In an era where politicians, irrespective of clime or political affiliation, seek to undergo individual projects with the ultimate aim of getting accolades and recognition not shared, three lawmakers have towed a path that appears to be the first as far as politicking is concerned in the country.

In 2012, three senators representing the state, Olubunmi Adetunmbi (Ekiti North), Anthony Adeniyi (Ekiti South) and Babafemi Ojudu (Ekiti Central), embarked on a joint project, the first of its kind in the state and in the country at large. The project, initiated under the platform of the Ekiti Senators Forum, is aimed at locating major projects in the different districts at different times through a joint funding platform by the lawmakers. In other words, the three senators would use all their constituency funds allocated to their districts in joint projects with massive effects on the lives of all their constituents. The projects by the legislators, which would be carried out under an active partnership arrangement with the United Nations Development Programme (UNDP) and the Ekiti State government, is aimed at establishing three massive community-based projects in the three senatorial districts following a specific timeline.

Brief insight into project thrusts
The Ero and Yemero are existing underutilised dams within Ekiti North district which capacities need to be optimised. This is expected to increase agricultural production that is crucial to reducing poverty and promoting food security for which irrigation is an essential entry point. Currently, farmers depend on rain-fed agriculture and are only able to farm for three to six months annually.

Ureje has the largest body of water in Ado Ekiti. The entire water front has eco-tourism appeal, with a large parcel of land of high real estate value. This type of infrastructure will add to the economic infrastructure and development of non-oil sector, as well as enhance revenue generation.

Egbe dam is constructed on Ose River at Egbe Ekiti in Ekiti East Local Government Area. The dam supplies the whole local government regular pipe-borne water. Both fishing and irrigation systems of farming are practiced by the locals. This dam could serve as a resort centre for tourists coming to the state.

A noble gesture
The objectives of the joint task by the lawmakers are laid on the solid background of service and direct delivery of the dividends of political stewardship to the people of the state thorough the establishment of durable community-based projects that will outlive their respective tenures. They are of the opinion that the spread of the projects over the entire state via a strict timeline and with a joint pool of funds will be effective in its mission. Much more precisely, they opine that “it would deliver high scale projects with state-wide economic impact in all the senatorial districts within the stipulated three years in a manner which all the three districts will have tangible outputs from the nominated constituency projects within a three year period.”

To them, it would also showcase a multi-stakeholder approach to good governance through transparent project funding to create jobs and local development. The projects will be in partnership with the UNDP, which will provide technical assistance, counterpart funding ($10,000,000) over a three year period to fill in project gaps) and implementation support and framework for the unique initiative. The technical support, however, will include pre-project preparation, including stakeholder coordination, technical feasibility and project documentation. It would also entail finalisation of programme design, advisory services, professional and technical assistance and procurement of process management. The implementation stage would entail support of the word body in the areas of management of pool funds and project supervision and monitoring.

This article was first published in Nigerian Tribune