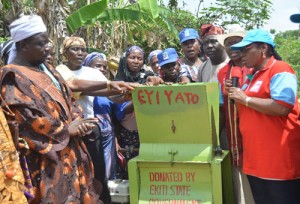 PIC 2651 Wife of Ekiti State Governor, Erelu Bisi Fayemi (right); Baale of Odo Iro, Alhaji Mohammed Sulaiman (left), when the governor's wife handed over of a garri processing machine to farmers in Ejiko and surrounding farmsteads in Irepodun/Ifelodun Local Government as part of her empowerment drive, at the weekend.

Wife of Ekiti State Governor, Erelu Bisi Fayemi, has said that the development of the state’s rural areas and farmsteads is work in progress, assuring the people of more dividends of democracy.

She gave the assurance during her visit to Ejiko and Aba Igbira in Irepodun/Ifelodun Local Government Area, as well as Asaride Farm, in Ido/Osi LGA in continuation of her empowerment visits to the farmsteads, at the weekend.

At each stop, she gave out gallons of kerosene, treated mosquito nets, cooking stoves, garri and palm oil processing machines, and other empowerment materials.

The First Lady said that some of the requests of the communities were already being put in place, promising that the Dr. Kayode Fayemi-led administration would continue to address these needs if re-elected in the June 21 election.

Scores of former members of the Peoples Democratic Party and Labour Party in the hamlets took advantage of the visit of the governor’s wife to defect to the ruling All Progressives Congress.

Addressing the defectors at Ejiko, the First Lady assured them that they would be given equal treatment and opportunities like the foundation members of the party.

She said, “I congratulate all of you for dumping darkness and coming into light. This is the party that has good plans for citizens, irrespective of age, social class, religion or ethnicity.

“Let me use this opportunity to admonish foundation members of the APC not to discriminate against the newcomers. Once you team up with our party, you have equal rights and opportunities.

“I want to task the defectors to go back to their former parties and woo more members for the APC. Go and tell them to also jettison darkness for light. The more the merrier.”

The leader of the defectors, Sule Ahmed, said they made up their mind to defect to the APC when they saw the impressive activities of the governor and his wife, as well as indigenes of Irepodun-Ifelodun LG serving under the governor.

He said, “The (Caretaker Committee) Chairman of the Local Government, Major Tajudeen Awe (retd); and Jaru (Mr. Deji Adesokan, Senior Special Assistant on Security to the Governor) are helping the people a lot.

“I’m surprised to find out that they are complementing the efforts of the government by also executing some projects in this village with their personal resources.”