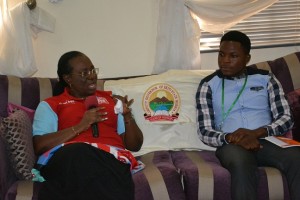 Through its local chapter in Ekiti State University (EKSU), Ado-Ekiti chapter, members of the Ekiti State Students Union yesterday hailed the Governor Kayode Fayemi-administration’s strides in the education sector.
The commendation by those directly affected by the turn-around in the education sector, countered the views of the opposition on the policies of the state government in the sector.

Led by its President, Mr. Ibitola Babatope on a visit to the Deputy Governor, Prof Modupe Adelabu at work, the union noted that the faithful implementation of Education and Human Capital Development –the fourth on the Eight-Point Agenda of the administration, has completely restored the dwindling fortune of education in the Land of
Honour State

His words: “The unprecedented landmark achievement this government has made in the education sector is vivid to the blind and audible to the deaf and cannot be controverted by any progressive minded person”.

He listed regular disbursement of bursary to indigent students in various tertiary intuitions within and outside the country, renovation of schools, distribution of laptop computers to teachers and students of secondary schools in Ekiti and regular subventions to state-owned tertiary institutions as some of the landmarks of the administration
in the sector.
Ibitola said Ekiti students could not afford to lose such great opportunities and would therefore support the governor in his bid to return to office to enable him consolidate on the foundations he has laid in the past three and a half years.
Responding, Prof Adelabu explained that the administration made education and human capital development on of its top priorities because it has to do with the development of the children and youthswho are future leaders.
She commended the students’ for being sensible and sensitive to the government’s effort to restore the glory of the state in education as the Fountain of Knowledge  which produced intellectuals and achievers and urged them to be studious and make the best use of the golden opportunities provided by the Kayode Fayemi led administration.
Adelabu who admonished them to shun unionism of violence urged them to always comport themselves and be of good behaviour as ambassadors of the state wherever they go, adding that the governor will continue to pursue policy that will make education easily accessible to all students irrespective of their parents’ socio-economy status.