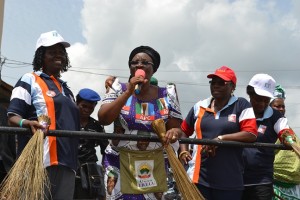 Say Fayemi re-election guarantees more development Ekiti State Deputy Governor Prof. Modupe Adelabu and the wife of the governor, Mrs Bisi Fayemi have launched a state-wide sensitization of voters especially women on how to cast their ballot in the June 21 governorship election.

The duo took the sensitization campaign to the popular Bisi and Oja Oba Markets in Ado-Ekiti to educate market women in a move to reduce
void votes and to enlighten them on the importance of exercising their franchise.

During the stall-to-stall mobilization in both ware points, Adelabu reminded the traders of how the state has been transformed by the Governor Kayode Fayemi-led administration through by embarking on various infrastructural development projects and introduction life-transforming policies since inception.

She pointed out that more women have benefited from the government’s social welfare scheme for the elderly, the free health programme and
the free health missions as well as the introduction of several masses-oriented schemes.

Mrs. Adelabu said: “Women should therefore be in the vanguard of the campaign for the re-election of Governor Kayode Fayemi. His
re-election is your guarantee you need to continue to enjoy socio-economic growth in a peaceful atmosphere. The present administration has in stock good programmes in the pipe line for women and the entire state when you return the governor to office with your votes.”

At a rally organized by the local Women Wing of the All Progressive Congress (APC) in Ado-Ekiti, the state capital, the deputy governor urged women not to be intimidated by the antics of the opposition but to come out on the election day and vote for the governor, who he described as best out of the candidates jostling for the exalted seat in Ekiti State.

She educated them on the APC party logo which will be on the ballot paper and urged them to be careful not to void their ballot paper while thumb printing so that their votes for the governor will count.
Also yesterday, the deputy governor urged commercial motor-cyclists, popularly known in the local parlance as Okada riders in the state
capital to be calm in the face of provocations but to remain resolute in their support for the re-election of Fayemi.

She gave the advice while addressing the Okada Riders Association who paid a solidarity visit to the Government House, Ado-Ekiti.
The operators who came in their hundreds were received at the Government House Ground by the deputy governor and Mrs Fayemi.

Adelabu accused the opposition of attempting to pit the operators against the government by circulating falsehood that they will be proscribed by Fayemi if voted into power again.
She alleged that the opposition was deliberately using the campaign of calumny because it was afraid of the existing rapport between the operators and the Fayemi administration.
The deputy governor the alleged plan to ban commercial motor-cyclists was the imagination of the opposition as a the Fayemi administration has no plan to throw the riders into the unemployment market.
Rather than take the means of livelihood away from the peoples, the government has plans to design more empowerment programmes to further
create employment opportunities, she assured.
The deputy governor urged the cyclists to be law abiding and decorum in the discharge of their services.