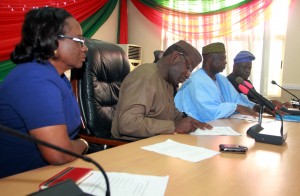 Ekiti State Governor, Dr Kayode Fayemi on Monday,  signed the 2014 Appropriation Bill passed by the State House of Assembly into law, with a promise not to relent in the pursuit of the people-oriented programmes aimed at banishing poverty from the State.

Signing the budget at the Exco Chambers, Governor’s office, the Governor lauded the Assembly for demonstrating the essence of genuine partnership with the Executive arm of government in ensuring that the administration is able to meet its obligations to the people.

He also opined that the House must have seen the performance of his administration to give it the much-needed support.

Dr. Fayemi stated that the Assembly has aligned with the Executive in the quest to banish poverty from the State by creating the legal framework for development as well as their impacts in the various constituencies.

While expressing confidence that his administration has not failed in fulfilling the promises made to the people in his inaugural speech in October 2010, the Governor asserted that all communities in the State have felt the positive impacts of government but his government will not shirk in ensuring that other challenges yet to be addressed are surmounted.

The Ekiti state legislature continues to demonstrate what it means to have a genuine partnership between the executive and the legislative branches of government. This is the second time that we are bringing the appropriation bill into an act of the legislature, into a law before the end of the preceding fiscal year in preparation for the succeeding fiscal year. This budget was christened a Budget of Stability and Economic Growth. By passing it into law, the legislature has also stressed the importance of our success in moving the State from a sordid past to the state of recovery and stability, and now in pursuit of economic growth”, Fayemi said.

Earlier, the Speaker of the Assembly, Dr Wale Omirin disclosed that the Assembly had to shift its Christmas recess in order to scrutinize and pass the appropriation bill, bringing all bills passed by the Assembly to 58 since June 2011.

He promised that the House would not relent in working for the common good, peace and growth of the State.

The Special Adviser to the Governor on Legislative Matters, Hon Dapo Karounwi said the present Assembly has demonstrated maturity and commitment to development in its dealing with the executive arm, adding that the lawmakers do not demand for gratis before doing their work.