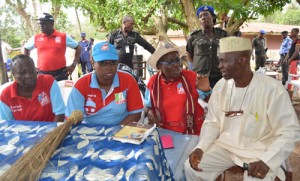 Ekiti State Government has begun enumeration of elderly citizens in farmsteads yet to benefit from the N5000 monthly social security scheme as part of steps by the government to expand its scope.

The Wife of the Governor, Erelu Bisi Fayemi, dropped the hint at Igimookongo community in Ado-Ekiti Local Government Area in continuation of her empowerment visit to Ekiti farmsteads, on Friday.

She said that her visit to the farmsteads, which had already covered 11 of the 16 Local Governments of the state, was also used to compile fresh list of citizens above 65 years of age.

The governor’s wife assured the enrollee that the state government was poised to start paying them the N5000 monthly allowance from the end of April to make ends meet.

To date, more than 20,000 citizens above 65 years are benefitting from scheme, which Governor Kayode Fayemi inaugurated in October 2011 in keeping faith with his electioneering promise.

Fayemi’s wife said, “As I move round the farmsteads we are compiling new list of elderly citizens for inclusion in the social security scheme. They will start to receive their money by the end of this month (April).

“The government under the leadership of Dr. Kayode Fayemi is committed to putting smiles on the faces of the elderly citizens. I urge you to return him to office with your votes in the June 21 election and more benefits will follow.”

Meanwhile, the governor’s wife has cautioned political gladiators to eschew violence in the build up to the June 21 governorship election.

She challenged those jostling to unseat her husband from the Oke Bareke Governor’s Office to go about their electioneering without unleashing violence on their perceived opponents.

The First Lady advised the governorship candidates to go to the electorate with their manifestoes under a peaceful atmosphere and leave the people to decide who they want to govern them in the next four years.

According to her, Fayemi had raised the bar in the governorship of the state judging by the massive turnaround recorded in every sector of the state in the last three years.

“In 2003, Ekiti could be likened to a Toyota car that can be driven by every Tom, Dick and Harry. But through the visionary leadership of Fayemi, Ekiti is now a Rolls Royce that cannot be driven by all-comers.

“Fayemi footprints are palpable and indelible in every nook and cranny of the state. And that is the huge difference between him and other candidates who are only promising you what they will do if elected.

“The essence of governance is to serve the people and Dr. Kayode Fayemi’s philosophy of leadership is one of service to the people and not the people serving the government. This informs his unrelenting effort at ensuring that Ekiti takes its pride of place in the country.”