At 64, No Impossibility In Prof Adelabu’s Dictionary 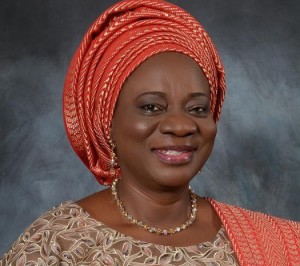 To teachers in the basic school, she is ‘Mama SUBEB’; in the academic circle, she is simply ‘Prof’; to her brothers and sisters, she is ‘Aunty Dupe’; and to her aides in the government arena, she is ‘Iya’. All these attest to the fact that Ekiti Deputy Governor, Prof Modupe Adeola Adelabu means different things to different people, writes her media aide BUNMI OGUNMODEDE
THOSE who felt that taking Princess Modupe Adeola Adelabu out of academics into what many call the murky waters of politics was like taking a fish out of water would by now be having a rethink by her records at the State Universal Basic Education Board (SUBEB) as Executive Chairman and the Deputy Governor’s Office.
For the professor of Educational Administration with bias in Policy and Personnel Issues, there is nothing suggestive that her break from the classrooms for the political turf has taken her out of the comfort zone. Unknown to many, her stint in the university community, which spanned over three decades, had prepared her for the present schedules.
As a varsity teacher, she had dealt with people of various characters and from different backgrounds. So, there is little or no difference leaving that environment for political position. As far as she is concerned, either as a teacher, or as a politician, her primary aim is service to the people.
The State Universal Basic Education Board (SUBEB), where she had served as chair before she was given additional responsibilities on May 8, 2013,  was like a training ground that eventually paved the way for her smooth transition.
There was no big deal leaving the classroom as an educationist for the chairmanship of SUBEB – a familiar terrain and a comfort zone by every
standard. On the Board as chair, she interacted with her natural constituency – academics and with politics – government.
“So, it was actually a very smooth and gradual transition. If from there I became the deputy governor, you can see that my transition was not as sharp as people thought earlier on,” she once told a reporter.
In the university system, she had a wide horizon in politics and of particular interest is that fact that her PhD thesis was on the Politics of Education.
“Look at me now. I am trying to put my theory into practice. Either politics of education or social politics or even political politics, you still must understand the concept of politics itself. So, all these have prepared me,” she has always told whoever cared to listen.
Since coming on board, she has dutifully assisted her principal, Dr John Kayode Fayemi, in the implementation of his Roadmap to Ekiti Recovery blueprint as encapsulated in the Eight-Point Agenda in a dual capacity as SUBEB chairman and deputy governor.
As obtained in all the states under the control of the All Progressives Congress (APC) party, Governor Fayemi has effectively made use of Prof Adelabu by delegating functions to her offices, either as deputy governor, or in SUBEB as chairman.
In other climes, deputy governors are spare tyres. But in the APC states, it is a waste of economic and human resources, time and personnel to have a deputy who has nothing to do. APC governors maximize abilities and capacities. In the Land of Honour State, the lecturer-turned politician relishes the task of catching up with a principal who serves with the speed of light.
Besides the Ministries of Education, Science & Technology and Local Government and Chieftaincy Affairs, which the governor specifically assigned to her for coordination, she knows that as a rule, the super ordinate is at liberty to call on any of the subordinates for any
assignment, especially when the competence of such lieutenants is not suspect.

Her view of the political space is positive. To her, there is enough room for men and women to operate but with a caveat – players not only
see politics as a game, they must first and foremost have other addresses. With players applying those two rules, the ‘do or die politics’ will disappear from the political lexicon, as a game must throw up a winner and the loser must be a good sportsman, while politicians would no longer tie their livelihood to politics.
The professor is likely to take on anybody who believes women should play the second fiddle in any field – professionally and politically.
For instance, the era of women confining themselves to the supporters club is gone for good.
When sometimes ago she was asked if women have a role in Nigeria’s competitive arena, the professor replied thus:
“Anyway, what we have been advising women generally is that if we fold our arms and think men would give us the chance, we are joking. We
have to go out and grab it. Take it by force if possible. Even the Bible says The kingdom of God suffereth violence and only the violent taketh it by force. You have to assert yourself otherwise you will be left behind.
“As I said earlier on, men are very territorial about leadership. They feel that leadership belongs to them. No, this is wrong. Anybody can be a leader because leadership has no gender. If you do not go out there and grab what belongs to you, men will not easily release it
because nobody wants to relinquish power easily especially politic power hitherto considered as men territory.
“Unfortunately, it is the women that actually do the voting in politics but they are not being voted for. What we are now telling women is that they should not only vote but should be voted for. If women should withdraw their vote, men would cry and this why I am saying men should not put women in the pigeon hole.
“They should not put women in a box where they cannot expand. The consequences of caging women could be counter-productive. If you put
us in a box, it is either we break the box or the box explodes because men should also take a cue from the fact that if they don’t allow
women to compete freely in the same space, the consequences could be dire. So, it is better we work together for the benefit of both
genders.”
With determination, she believes there is always a way around every knotty situation, hence, those with the “it’s not possible spirit”
cannot be found around her.
The Command Performance – a drama staged by basic school pupils during the third year anniversary of the Fayemi-led administration at the
Abiodun Adetiloye Hall, was a product of her faith in the biblical saying that “with God, nothing shall be impossible,” after all, the journey of a 1000 years must start with step.
At 64, Princess Adelabu remains a woman of many parts. She is not a push-over in the academic community just as she cannot be suppressed
in the political space. The professor is at home with the grassroots with her mastery of the homogeneous Ekiti dialect with Ado-Ekiti accent.